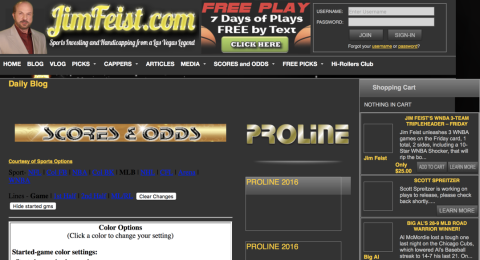 Service Note: Al McMordie can also be found at handicappers.donbest.com.

In 2012, Big Al ranked #1 in the NFL, with a 76.7% record on his Late Phone Service, as documented by The Sports Monitor. In 2007, Big Al won the $100,000 World Series of Sports Handicapping, and also finished #1 in March Madness. In 2004, Al won the most prestigious handicapping contest in Las Vegas -- The Stardust Invitational. Overall, in the last 21 years, Big Al has garnered 36 NUMBER ONE awards in Football, Basketball, and Baseball; 151 Top 5 finishes; and 290 Top 10 finishes. Al is a featured handicapper both on National TV and Radio, as well as at the most prestigious gambling web sites. Additionally, in 2002, Big Al was featured in FHM Magazine, and he was featured in ESPN Magazine in 2010. In 2000, Al was 157-114 in football, including 10-0 (100%) in the NFL Playoffs. Al has won 15 of his 21 football seasons. Another highlight of Al's career came in 1997, when Big Al was ranked #1 by SPORTS WATCH in College Football/NFL Win Percentage and #1 in College Football Regular Season/Bowls by THE SPORTS MONITOR. Al has one of the best basketball records over the past 21 seasons (winning 16 of 21 seasons), and was ranked #1 in baseball for the 1996 and 2001 seasons. For consistency across all three sports, you can count on Al McMordie. Indeed, the Las Vegas Sporting News recognized Al in its December 17, 1996 issue, and wrote that: "[Al's] honesty, integrity, [and] skills...are obvious....We have been impressed by [his] uncanny ability to pick big underdogs that win the game straight-up....We've seen handicappers come and go, and get hot and cold, but no one has been as consistent over time as McMordie, and we strongly urge you to consider him as your handicapper." Besides being a champion handicapper, Al McMordie is a corporate attorney, and earned his undergraduate and law degrees from the University of Michigan. Al resides in the Hollywood Hills of Los Angeles.