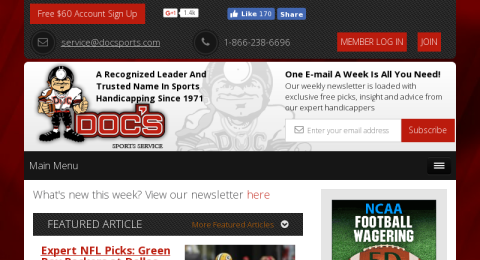 Handicapping Success: Mike Davis burst onto the handicapping scene in the early 2000's. He started his own website and garnished the attention of many of the top executives in the business. After nearly a year of negotiations, Mike sold his website and joined one major website (unnamed) and a network of other sites. His innate ability to stay at the top of the leaderboards in many different sports was and is still unmatched. Biggest Win: My biggest win was a future play on the Alabama Crimson Tide to win the National Championship prior to the 2009-2010 season. I have a major connection with that university and his confidence certainly pushed me over the top to make a huge wager, Mike said.

Over the past 2 years, Mike took time off from the public handicapping industry to coach football. He is also a well known radio personality in the Southeastern United States. Mike has interviewed many current and former players and coaches including big names like: Bobby Bowden, Mark Richt, Jimbo Fisher, Kirby Smart, Deion Sanders, Rodney Harrison, Chad Ochocinco, Laremy Tunsil, Randall Godfrey, Derrick Henry, Malcolm Mitchell, Telvin Smith, Greg Reid, Reuben Foster, and many more (those are just the football interviews). Mike has relationships with many coaches, players, radio hosts, and newspaper reporters. These relationships come in handy in the handicapping industry. I couldn't stay away. When it is in you, it is in you. I love the daily grind and most importantly, I love the daily competition of trying to beat the bookmakers. I played baseball, basketball and football in high school and I played basketball in college. I have to compete; the urge to compete is in me and it isn't going anywhere.