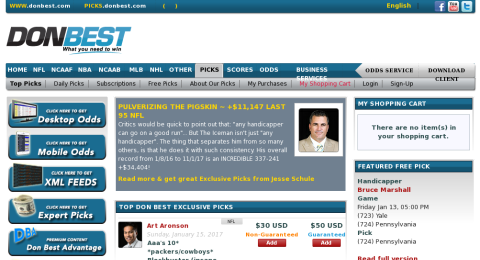 Neil the Greek(AKA Gatorsneil75) broke on the scene like a Barry Sanders TD run. He came on the sports betting scene back in 2009 where he was the number one handicapper in a few different sports across many online forums. He has not slowed down since. He grew a following of 1000's across many different forums. His all sports thread had over 100k hits in just 3 weeks in a forum that never had more than 15k. He became a sensation due to his honest, southern guy approach. When he had a bad day, he would be the first to say it. His winning percentages in 7 different sports were impressive to say the least. And his BIG PLAYS were even better. Neil started selling his picks a few years ago, and has quickly made a reputation as one of the best multi-sports cappers in the world. What separates him from the competition is how well he does across a variety of different sports. He caps NFL, NCAAF, MLB, NBA, NCAAB, CFL, WNBA, and Soccer. His documented plays have been astonishing over the last couple of years. His playoff NBA record this year was 30-14, which doesn't even compare to the 43-14 record he built the year before. This year, in the March Madness tourney, he went 29-11. Last year in the NFL, he was 45-28 during the regular season, and 8-5 during the playoffs. Those numbers are good, but nothing compared to his playoff run of 2012. He didn't lose his first game until the SB. He finished the playoffs going 10-1. Since he started selling his picks online, he has been at 57% or better in all the sports he handicaps. Over the last 14 months, only one losing month for Neil, and only 11 losing weeks total. That's 49 winning weeks out of 60...simply amazing. What's even better is that he was giving away a week's worth of free picks, just to prove how good he really is. And still his best handicapping comes in the form of 2nd half wagers. His halftime plays in all sports have cashed in close to 70% since he started posting. There are a lot of guys who claim to be great, Neil is willing to put his winning ways where his mouth is. He doesn't fabricate his record, or have some "lock system" that never loses. He understands bad runs happen. He uses his sports knowledge, time as an online sports talk host, statistical analysis, trend analysis, and situational analysis to make sure those bad runs only come at a minimum. If you want to make money without the hassle of a "salesman", then you got the right guy for the job. You will appreciate his love for sports betting, his crazy sports knowledge, his 14 hour a day dedication, his honesty and integrity, and most important...his winning ways!